It has been a while we wanted to be back on the road with our Bullet. We took advantage of a day off end of January to escape the city for the countryside, North of Bangalore. We have had identified two stop-over: Lepakshi temple 130 kms far from Bangalore and Chiradurga Fort 180 kms further.

We started our trip at 7h15 with 2 Bullets, yes, we were motivated! But something or someone didn’t want us to leave that early…. 10 minutes after our departure the gearbox of our friend’s Bullet broke down. At this time, it’s impossible to find a mechanic guy so we decided to continue without them and they’ll catch us later (we had to meet an other friend on the way). But 10 kms later our engine get suddendly stucked. A dosa later, our engine started again and after a quick service with our favourite mechanic, Noor in Indiranagar, we could star our trip again with our 2 bullets (meanwhile, our friends were also able to get their Bullet to be fixed).
This kind of situation doesn’t even surprise us anymore: we know how the Bullet can be unpredictable, it’s part of its charm…. And after these incidents, the 2 motorbikes went perfectly for 3 days.

Despite this late departure, we were able to visit Lepakshi the first day, where there is a wonderful temple with a well painted ceiling (the first time wa can see that in India) and a beautiful Nandhi Status (which is said to be the biggest in India). The day after, we went out of our planned route to see Penukonda where the remains of a fort and temple were supposed to be. We finally discovered a wonderful road with multiple hairpins over the valley. After crossing numerous villages, cotton fields, lakes, overloaded rickshaws on paved or unpaved roads we finished our trip visiting the nice Chitradurga fort.

Travelling on a motorbike always brings some surprises we just love: a magnificient road, a surpringly very good thali in a dusted city, smiles from the backs of the rickshaws, villages which seemed still stucked in the last century…. it’s like travelling in time and discovering an other India, infinite. 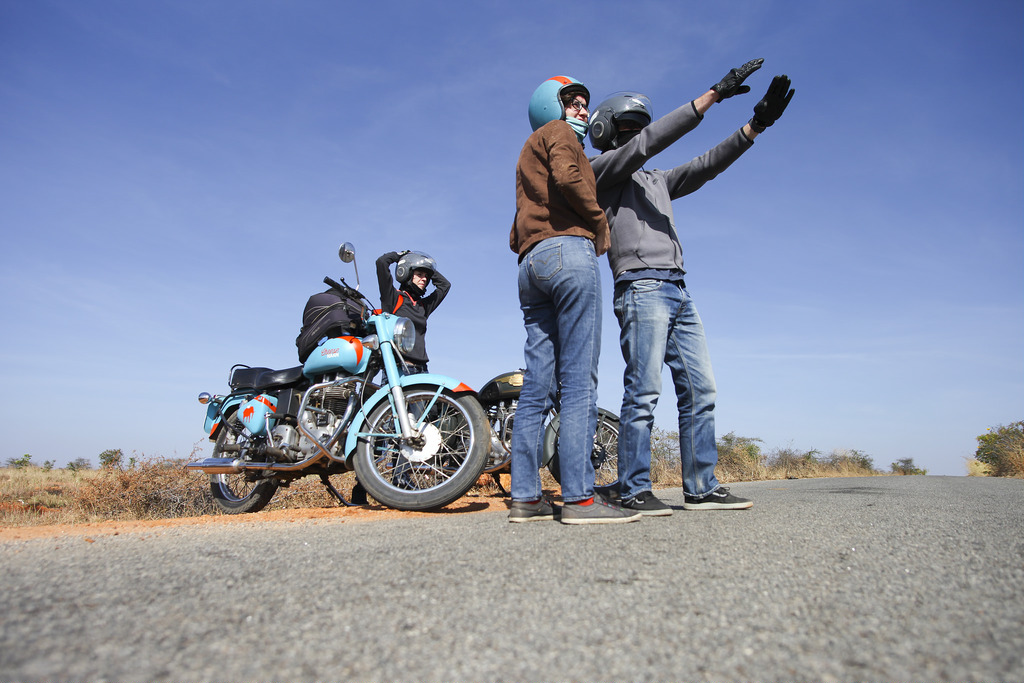 Believe it or not, we (almost) became cricket fans and RCB supporters!

And here it comes, our food-truck: “Le Casse-Croûte”